Jews from central Europe, principally Germany, began arriving in central Illinois at the middle of the 19th century.  Their stories were familiar tales that played out in many parts of America.  Some were itinerant peddlers who put down roots, opened stores, and prospered.  Others purchased farmland in surrounding small towns.  In time, family members from Chicago, the east coast, or “the old country” would join them.

In 1858 (some 18 years after Springfield was chartered as a city and 50 years after Illinois was admitted to the Union) approximately 20 early Jewish settlers in Central Illinois formed the Springfield Hebrew Congregation.  The migration of Jewish individuals and families had begun, as settlers made their way to Springfield and to such small communities as Athens, Pleasant Plains, Salisbury, and Petersburg.  Most of them came from Germany and all were seeking the freedom of the new world and the opportunities it offered.  Mr. Julius Hammerslough, a friend of Abraham Lincoln and the first known Jew in Springfield, was elected the first president of the congregation.  The Hammersloughs were closely associated with the Rosenwald family (of Sears-Roebuck fame). 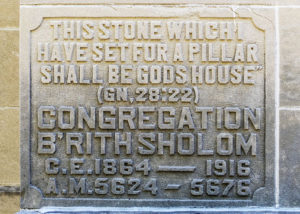 Services were originally conducted in accordance with German minhag and the first rabbi, Bernard Deutsch, arrived from Bohemia in 1866.  In that same year, burial ground was purchased in Oak Ridge Cemetery for $384 and two additional purchases were made by 1884 for $1371.  By 1871, the congregation had gown to 25 families with 12 children in the Religious School.  They met in members homes and rented quarters until 1876, when the Springfield Hebrew Congregation’s “Temple on Fifth Street” was built.

The membership of the Springfield Hebrew Congregation grew steadily from 30 families to nearly twice that size.  By 1914, it became apparent that the Temple building was inadequate.  In 1917 the present neo-classical style building, designed by Robert Bouillard, was completed and dedicated.  A new charter was procured and the official name of the congregation became Temple B’rith Sholom.  Its stated mission was “to foster the worship of a Supreme Being in accordance with the teachings of the Jewish religion and to help in all enterprises and endeavors that have the welfare of humanity at heart.”

The difficult years of the Depression and World War II were followed by post-war growth and prosperity.  By 1922 the congregation had already grown to 92 families with 77 children in the Religious School.  There was clearly a need for additional space.  The addition of the Memorial Wing in 1958 provided offices, a library, classrooms, a kitchen and a social hall.

Over the years, we have been served by several distinguished rabbis as listed below. The longest serving spiritual leaders  include the aforementioned Bernard Deutsch, Dr. Abram Schar, Rabbi Herman Snyder, and Rabbi Meyer Abramowitz (chiefly responsible for the Temple’s handsome art and Judaica collection).

For 160 years Temple B’rith Sholom has been a pioneer in Central Illinois in Reform traditions.  We continue our heritage of interfaith activities and social action.  We are duly proud of our past.